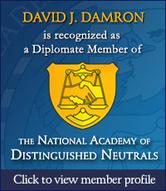 Mr. Damron also offers his services as a special master to assist in the resolution of discovery matters and other issues in complex litigation the court and/or parties require assistance in resolving.   After decades practicing in complex litigation, he has extensive experience in the types of disputes that arise in these cases.

Mr. Damron is licensed to practice law in the States of Arizona and California.  He is also admitted to the U.S. District Court, the 9th Circuit Court of Appeals and the United States Supreme Court.  He graduated in 1975 from Arizona State University College of Law, with Honors Colloquium. He earned a Bachelor of Arts degree in 1969 from Arizona State University.  He joined Sanders & Parks, P.C. in 1983, where he was an owner and director.  Mr. Damron was the Managing Director of Sanders & Parks, P.C. 1999-2007 and retired in January, 2007.

Mr. Damron specializes in Alternative Dispute Resolution including mediation, settlement conferences and arbitration.  Mr. Damron has mediated over one thousand matters in his practice through the years and his participation as a Judge Pro Tem.  In addition, Mr. Damron has completed a certification course as a Mediator through The Mediation Agency in the United Kingdom and has attended the prestigious Straus Institute for Dispute Resolution at Pepperdine School of Law.